On Friday 21 July, the annual K-Days Parade kicked off one of Edmonton’s biggest summer festivals with thousands of people lining the streets to take in the festivity. One of the themes included celebrating Canada’s 150th Anniversary and as a way to mark the occasion Second World War and Korean War Veterans were invited to be honorary parade marshals for this year’s event.

Our veterans have fiercely upheld our values allowing us the freedoms we enjoy today while having a voice on the world stage. We all have so much to be grateful for as we celebrate Canada’s 150th birthday.

The marshalling stage complete, parade paquets start to deploy as the Honorary’s Second World War Command Staff Car awaits – commanded by Loyal Eddie, Bert Plowman. The Edmonton Police Service Pipes and Drums has already began to lead the way as the RCA Band and 1 CMBG contingent make ready. The EPS Pipes and Drums are affiliated with the PPCLI and The L EDMN R. 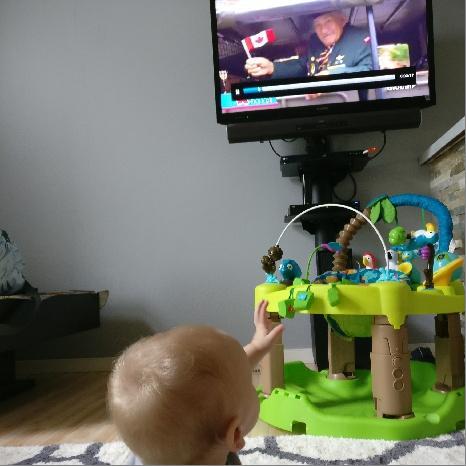 Pictured is a one-in-a-million shot; a nine month old grandson is waving back at his grandfather (Kapyong vet – Lyle McIvor, riding in the G Wagon), who thinks he’s waving the flag at him while on TV. Little did Grandpa know that looking directly into a “random” camera would lead to this. Wow….