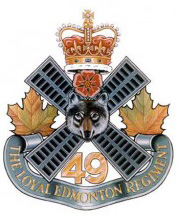 Between two maple leaves a windmill sail in saltire superimposed upon the centre of the sail a coyote’s head affronte surmounting the coyote’s head the red rose of Lancaster below the coyote’s head and resting on a scroll inscribed “THE LOYAL EDMONTON REGIMENT” the numerals “49” the whole surmounted by the Crown.

Grey and Green from the 49th Battalion’s World War One divisional and brigade patches, Black from the allied British regiment in memory of General Wolfe, and Red from The Loyal Edmonton Regiment’s World War Two divisional patch.

British Army – From 1933, The Loyal Regiment (North Lancashire). From 1970, The Queen’s Lancashire Regiment. From 2006, The Duke of Lancaster’s Regiment (Kings, Lancashire and Border)

(Battle Honours in bold are those emblazoned on the Regimental Colours)

The 101st Regiment (Edmonton Fusiliers) contributed to the 9th Battalion, CEF, on its formation in September 1914 and later to the 31st Battalion, CEF; it also recruited for the 49th, 51st and 63rd Battalions, CEF. The 49th Battalion served in France and Flanders with the 7th Infantry Brigade, 3rd Canadian Division, from 9 October 1915 until the Armistice. The 51st and 63rd Battalions provided reinforcements for the Canadian Corps in the field.

The regiment mobilized The Edmonton Regiment, CASF on 1 September 1939.’ This unit embarked for Britain on 22 December 1939. A detachment took part in the expedition to Spitsbergen in August 1941. The unit landed in Sicily on 10 July 1943, as part of the 2nd Infantry Brigade, 1st Canadian Infantry Division, and in Italy on 4 September 1943. It moved to North-West Europe in March 1945. The active unit was disbanded on 15 October 1945. A 2nd Battalion served in Reserve Army.” The 3rd Canadian Infantry Battalion (The Loyal Edmonton Regiment) mobilized on 1 June 1945 for service with the Canadian Army Pacific Force,” and was disbanded on 1 November 1945.

On the Colour’s obverse side, as a central badge within the annulus, a silver windmill sail in saltire charged with a wolf’s head proper affront on a crimson field.

A French grey flag divided horizontally into two equal parts by a tricolour stripe. The stripes from the top are a thick stripe of green, a thin stripe of red and a thick stripe of black. A regimental badge is centred on the flag.

The official badge, in brass, with red felt backing.

The official badge, in brass.

The letters “L EDMN R”, in brass. On garrison dress, a cloth shoulder-sleeve title with “49TH” over the words “THE LOYAL EDMONTON REGT” over “CANADA” in green on French grey edged black.