The L EDMN R conducted an intimate Passchendaele Centenary Memorial Service at the CO’s Parade on October 4th.  Members of the Regimental Family were invited to attend.

Passchendaele in percentage terms was the costliest battle the 49th Battalion ever fought. The Battalion lost three quarters of its strength in a few hours on the morning of 30 October 1917. By the time the Battalion was pulled out that evening, only 145 of the nearly 600 soldiers that had started the day remained standing. It was here that Private Cecil J. Kinross was awarded his Victoria Cross. 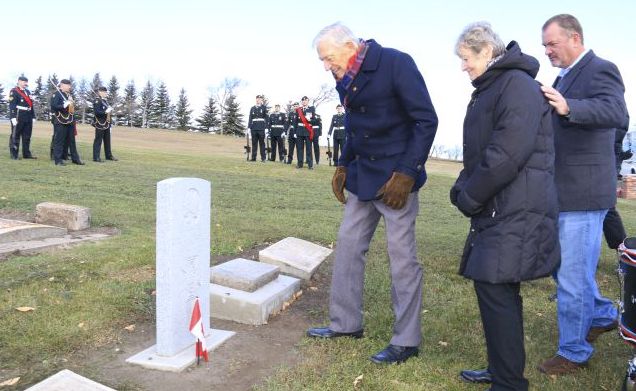 John Kinross Kennedy (centre) and two family members of Private Cecil J. Kinross, VC, approach the grave marker that was unveiled moments earlier during a rededication ceremony on Oct. 24, 2015 at the village of Lougheed, Alberta. Members of the Kinross family travelled from across Canada and the United States to participate in the ceremony. Later his medals would be on loan and display at Edmonton City Hall.