This past Thanksgiving Week-end, Grand Prairie gave us much more to think about and to be thankful for. A new monument dedicated to our veterans of the Afghanistan War was unveiled with a poignant ceremony, 7 October 2017, at its Army, Navy and Air Force Veteran’s of Canada (ANAVETS ) Hall. In addition to the seven-foot tall granite monument’s dedication (bearing the names of our 158 fallen soldiers), there was the unveiling of four soldiers’ individual memorials surrounding the larger one – Master Corporal Raymond Arndt, Corporal Joshua Baker and Corporal Zachery McCormack of The Loyal Edmonton Regiment and Master Corporal Timothy Wilson, originally from Grande Prairie and a member of Second Battalion Princess Patricia’s Canadian Light Infantry. Family members of those fallen soldiers helped unveil individual memorials to their relatives. 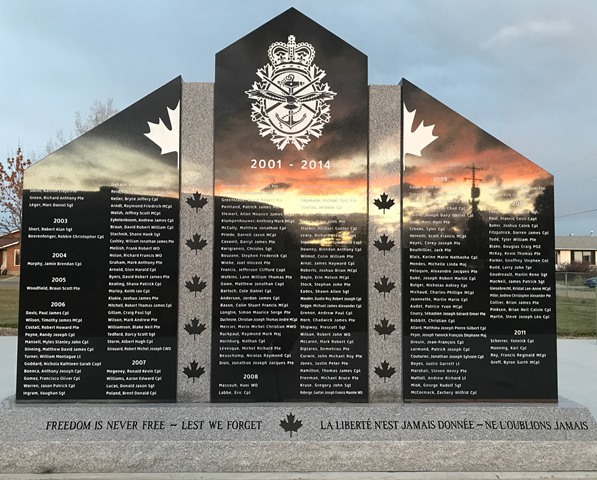 This photograph of the Grande Prairie Afghanistan War Monument was taken the evening before the ceremony, reminiscent of lines
taken from The Act of Remembrance – At the going down of the sun and in the morning, we will remember them.

Project Lead for ANAVETS, Renee Charbonneau emotionally and proudly stated, “It’s been a two-year labour of love to get to this point, and remembering 158 fallen soldiers and the families and their sacrifices is what we’re here for.”

There were about 65 members of the public in attendance in addition to the Royal Canadian Legion Colour Guard, Grande Prairie’s Army Cadet Corps (L EDMN R) and Air Cadet Squadron, The Grande Prairie Pipes & Drums Band and Grande Prairie’s “A” list of VIPs – all supported by The Loyal Edmonton Regiment’s Band, Regimental Piper, Chaplain and members.

Grande Prairie’s historical connection with The Loyal Edmonton Regiment remains visible with the survival of the D Company Armoury – dating back to the Second World War and is still in use by one of its Army Cadet Corps. D Coy, after having been stood up during the war, was disbanded just short of Canadian Armed Forces integration, 1968/69. While speaking at the ceremony, CO L EDMN R said in deep appreciation, “The citizens of Grande Prairie are not strangers to service, they’re not strangers to loss. And monuments such as this one serve to reinforce this community’s lasting commitment to the defence of this nation and the unbroken kinship with The Loyal Edmonton Regiment.”