Loyal Eddies Throw Down The Beats At Army Ball

Before Lieutenant-General P. Wynnyk assumes his appointment as Second in Command Canadian Armed Forces he hosted his last Canadian Army Ball as its commander, Saturday 14 April 2018 at the fabulous Hilton Lac Leamy Hotel in Gatineau, Quebec. Upon arrival, everybody was greeted by members of The Royal Canadian Hussars (Montreal) Riding Troop. Amongst the many senior and distinguished guests was The Governor General of Canada with the Lieutenant Governors of Ontario and Quebec.

Since its inception in 2005, the event has become the military gala event of the year – an evening full of Army pageantry. This year’s gala recognized the 75th Anniversary of Canada’s participation in the Sicilian and Italian Campaign during the Second World War. In addition to hard-earned successes within that theatre, vital lessons learned would be applied to the landing at Normandy and the epic battles further fought on continental Europe, subsequently leading to the Allied victory.

In addition to speeches and presentations, Rick Mercer was on hand with a surprise cameo video. A wonderful Italian Campaign video was presented on several massive screens, commemorating the “D Day Dodgers’” magnificent legacy. Musical performances were provided by the Regimental Band of the Governor General’s Foot Guard, The Seaforth Highlanders of Canada Pipers, The Loyal Edmonton Regiment’s Drum Line, the Cameron Highlanders of Ottawa (Duke of Edinburgh’s Own) Pipes and Drums accompanied by the RCMP Dancers, The Army Voices (Army Choir) featuring Dr. Fraser Rubens and the SWAY Band. 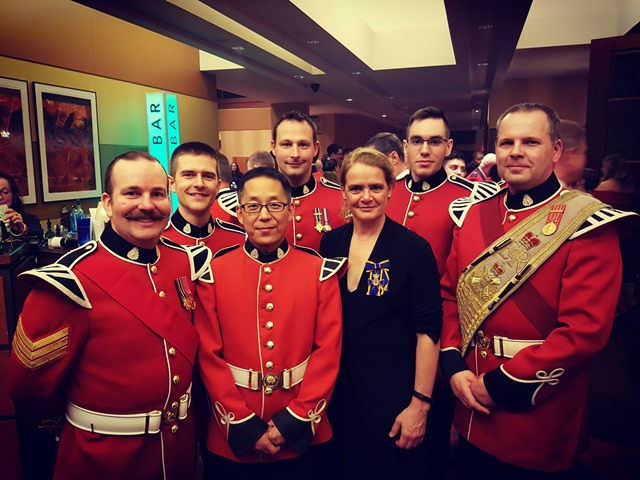 Photographed outside of the ball room is The Loyal Edmonton Regiment’s Drum Line from left to right: Sgt Sandy Parry, Cpl Greg Upham-Mills, Pte Hee-Young Joe, MCpl Wolfgang Brettner, The Governor General of Canada – Her Excellency the Right Honourable Julie Payette, MCpl Clayton Castel and Drum Major – WO Warren Rubin. The Drum Line is comprised of Infantry soldiers and musicians with the Regiment. Long ago, for centuries, commanders would issue orders with the use of bugles and drums.