The Louis Scott Cock O’ The Walk Trophy is for the winner of the competition pistol shoot between the COs and RSMs of the units of the PPCLI, including The Loyal Edmonton Regiment (4 PPCLI). As was the case last year, it would be an extraordinarily close competition. The two-way tied champs from last year (1 PPCLI and L EDMN R) surrendered their niche in regimental history to the Rear Party Command Team of 3 PPCLI. The 2nd Bn was LOB – left out of battle. The L EDMN R hosted this year’s competition. 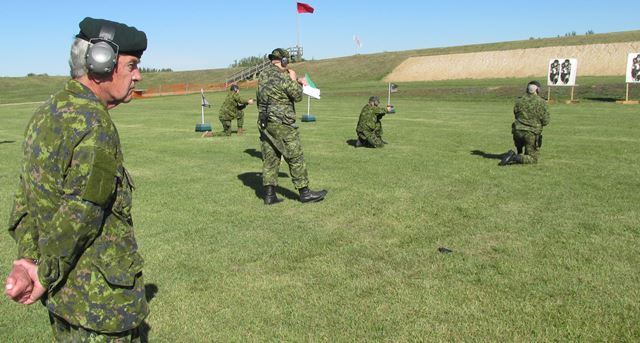 The Rear Party Command Teams of 1 and 3 PPCLI ready to engage targets in a timed shoot as the PPCLI Colonel of the Regiment, MGen (Retd) Brian Vernon looks on.

The Louis Scott Cock O’ The Walk Trophy perpetuates a hard-earned kinship and official affiliation between PPCLI and The L EDMN R based on mutual support during both World Wars up to and including the Liberation of Holland. The two Regiments have enjoyed working together and supporting each other on many occasions over the past many decades since the affiliation was formally introduced in 1954.

Presentation to 1st place winners by MND, The Honourable Harjit Singh Sajjan was at the French Grey Ball, Hotel MacDonald, 26 August 2017. The victors from 3 PPCLI include Maj Slade Lerch and MWO George Parrott (missing from the picture). In his summer white mess kit – a Bisley Shot, is Capt Joe Jasper; looking on, thrilled by anything to do with guns.

Given Louis Scott’s service with both Regiments, his namesake competition and trophy is a tangible symbol of this kinship. The following as per PPCLI Regimental Manual, refers:

“Louis Scott, PPCLI Regimental Number 640, enlisted in PPCLI as a Private in August 1914, and served as Regimental Sergeant Major from May 1915 to December 1915. He was then commissioned and seconded to the Royal Air Force as an instructor. In 1920, he recruited C Company of First Battalion, The Edmonton Regiment, and took over command of the Regiment from November 1923 to January 1927. During the Second World War, Colonel Scott served in various locations in Western Canada. He retired to England until his death in 1965. His son served in The Loyal Edmonton Regiment during WWII, attaining the rank of Captain. Mr. Kenneth Scott, Esq., Copperfield 14, Blackhills, Esher, Surrey, England, son of the late Colonel Louis Scott, OBE, DCM, ED, offered to present a trophy, for Regimental competition, in memory of his father and on behalf of his mother and himself. This offer was accepted and a trophy was produced by Henry Birk’s and Sons, Edmonton, Alberta. It was completed in 1967.”